The new ILSAC GF-6 and API SP specifications for passenger car motor oil will launch on May 1, 2020, directly affecting both installers and consumers.

These new, higher performance oil categories have been developed in response to several driving forces. The most important factors include need to improve fuel economy and reduce greenhouse gas emissions as well as the increasing demands of modern engine technologies.

According to Keven Ferrick, director, API Product Programs, “API [American Petroleum Institute] developed these new performance standards in response to a request from automakers to introduce more robust engine oils that would be capable of meeting the needs of current and future gasoline engines.”

In addition to API, the International Lubricants Standardization and Approval Committee (ILSAC), original equipment manufacturers (OEMs), and producers like Kendall® Motor Oil have all contributed to the development and upcoming implementation of these new standards over the past seven years.

In this blog post, we’ll provide an overview of everything you need to know about the new ILSAC GF-6 and API SP passenger car motor oil specifications.

An Overview of ILSAC GF-6 and API SP

To accommodate lower viscosity levels like OW-16, ILSAC GF-6 has been divided into two separate categories: GF-6A and GF-6B.

In the past, ILSAC has strived to create “evergreen” standards that are fully backward-compatible with previous standards. However, the new low-viscosity oil OW-16 is not compatible with most older engines, and therefore warrants a separate category.

This category is fully backward-compatible with previous API service categories, including API SN PLUS, SN, SM, SL or SJ.

API SP will be represented by the traditional “donut” mark shown below. 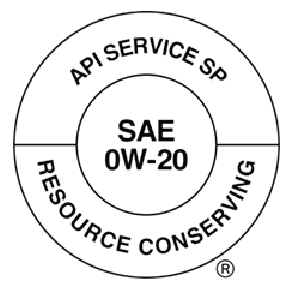 Why Do We Need the New ILSAC GF-6 and API SP Motor Oil Standards?

There are several factors driving the need for the new passenger vehicle motor oil standards, including environmental, market, and technological influences.

The EPA reports that for 2017, 59% of all greenhouse gas emissions (GHG) from the transportation sector came from light-duty vehicles.

This has led to new EPA regulations under the Clean Air Act that limit the maximum GHG emissions allowed for vehicles from different model year (MY) ranges.

Another important factor has been the implementation of the Corporate Average Fuel Economy (CAFE) standards by the National Highway Traffic Safety Administration (NHTSA).

NHTSA’s Corporate Average Fuel Economy (CAFE) standards regulate how far our vehicles must travel on a gallon of fuel. In other words, it stipulates the minimum miles/gallon different vehicle types must present to be sold in the market, which also vary by MY ranges.

The majority of today’s vehicle manufacturers, including all North American OEMs, are required to meet these and other environmental regulations.

As a result, OEMs have turned to several methods to help reduce greenhouse gas emissions and increase fuel economy. The major strategies include the development of new, lighter weight and higher performance engine technologies as well as the push for updated motor oils.

Today’s consumers, especially in developed economies, are looking for ways to reduce their carbon footprint.

And although the price of gasoline has come down significantly since its peak at $3.96 in April 2012, consumers have not stopped factoring fuel economy into their vehicle purchasing decisions.

This new technology allows for a smaller engine to make, essentially, the same horsepower as a larger engine thanks to the turbocharging feature. And with it comes improved fuel efficiency for light-weight vehicles.

However, combining turbochargers with GDI presents a unique set of problems, including an abnormal combustion phenomenon known as low speed pre-ignition (LSPI).

According to the Society of Automotive Engineers (SAE), LSPI is an uncontrolled combustion event that takes place prior to spark ignition, often resulting in knock, and has been known to cause catastrophic engine damage.

There are several factors that contribute to this phenomenon, including engine design, calibration, fuel properties, and engine oil formulation.

One of the key features of the ILSAC GF-6 and API SP oils is the protection they offer in helping prevent LSPI in engines with the TGDI technology.

Another important engine design change has been the advent of start-stop engines.

These engines stop when a vehicle becomes stationary at a stoplight or in heavy traffic, and then start back up again as soon as you hit the gas pedal.

However, stop-start engines also present some unique problems in terms of wear, sludge formation, and varnish.

For example, imagine it’s a cold winter day, and your route includes a short 3-4 stoplight commute before getting on the highway.

In this scenario, a stop-start engine has little chance to heat up before being required to quickly reach highway speeds, potentially causing wear, sludge, and varnish issues.

The GF-6 and API SP oils have also been formulated to help prevent these problems in engines with stop-start technology.

Advancements in oil production have led to the creation of the lowest-viscosity oil grade yet, OW-16.

However, they must be formulated correctly for the vehicle at hand to ensure the engine is protected.

Kendall’s Technical Coordinator for Automotive Products, Kyle Kress, reminds us that “it’s important to verify if your engine type is compatible with OW-16 by consulting your owner’s manual or directly with your OEM to ensure you’re pouring the right engine oil into your car or truck”.

Benefits of the GF-6 and API SP Motor Oil Standards

In summary, the motor oils formulated to meet the new ILSAC GF-6 and API SP standards offer a range of benefits for the environment, OEMs, and consumers.

Some of the most important benefits include:

The creation of the new GF-6 and API SP standards required collaboration between OEMs, industry formulators, and oil producers.

As a prominent producer of passenger vehicle motor oils, Kendall has been involved every step of the way in the development of these new oil standards.

This has included providing test oils for OEMs to help perfect the right formulas that support the environmental and technical requirements of today’s most advanced vehicles and engines.

Kendall has also been testing the new GF-6 and API SP oils in our own fleet of vehicles to ensure optimal performance in both real-world and testing scenarios.

Munchel also affirms that “given the improvements over a wide slate of engine types, we’re going to implement API SP and ILSAC GF-6 technology in our full line-up for Kendall Motor Oils.”

What does the adoption of GF-6 and API SP mean for Kendall customers?

Kendall’s upgraded line of motor oils will be properly formulated for both modern and legacy engines.

You can count on having the same high level of protection that Kendall has always provided. This includes the zinc additive that has always helped provide added wear and oxidation protection.

And now, in addition to these benefits, our new line of GF-6 and API SP standard oils will provide increased protection against low speed pre-ignition, oxidation, sludge, and varnish, as well as improved fuel economy and reduced GHG emissions.

The new passenger car motor oil standards, ILSAC GF-6A and GF-6B, and API SP are set to come into effect May 2020.

These new standards have been developed as a collaborative effort between API, ILSAC, OEMs, oil producers, and other industry players in response to heightened environmental regulations as well as the increased demands of today’s most modern engine types.

It’s crucial for both consumers and installers to be aware of the new motor oil specifications to ensure you use the correct oil type for each vehicle.

Kendal Motor Oil has been directly involved in the process of developing these new standards. And we will be implementing both GF-6 and API SP across our full product line, which will be available to installers and consumers starting May 1, 2020.

Interested in learning more about GF-6 and API SP specifications and what it means for your lube shop business or personal vehicle?

Be sure to check Kendall’s GF-6 video series and FAQs.

Houston, Texas — Phillips 66 and Kendall® will add their most advanced diesel engine oils yet to their proven heavy-duty product portfolio.…

THE LATEST PCMO FORMULATION ON THE HORIZON. As a major change in passenger car motor oils is on the Horizon,…

THE LATEST
AND GREATEST

DAWN OF A
LEGEND

Thank you for subscribing!

Thank you for reaching out,
one of our experts will contact you soon.

In the meantime, check out some of our online resources.

Thank you for subscribing!